Our Client, an emerging healthcare firm was experiencing rapid growth which was stressing their existing processes. The issue had gotten to the point where management felt the current processes were no longer acceptable because of the number of manual workflows and department inefficiencies leading to worker burnout and turnover. It became apparent to senior management that they needed to focus on streamlining the functions that were heavily affected by these issues: Corporate Accounting, Financial Planning & Analysis, and Human Resources. In order to accomplish this goal, the firm decided to implement an end-to-end Enterprise Resource Planning (“ERP”) application with the intention of integrating the system with its Human Capital Management (“HCM”) and Financial processes.

After several months of using the new application, it became increasingly clear to management that the system was not set up to adapt to the evolving environment at the company. Despite the new system being implemented, the company was still experiencing a continued increase in manual workarounds and inefficient processes including, Excel-generated, monthly and one-off financial reports from various external data sources and frustrations of the team were boiling over.  This process was prone to errors due to Excel’s inherent weak reporting controls. The Human Resources processes were equally disjointed. For example, managing compensation, benefits, and employee on/off-boarding included many redundant tasks within the department itself. In short, the firm was not getting the full realization of the Financial and HCM modules they had purchased from the ERP vendor.

The company asked FinServ to determine why their goals for the new system were not being achieved. FinServ utilized its Operational Assessment methodology, a methodology based on many years of experience with integrating similar systems and re-engineering operations. FinServ provided the client with an operational roadmap to achieve a higher Return On Investment (“ROI”) from their purchased system. The methodology focuses on; 1) uncovering and analyzing, and 2) documenting the issues that are preventing the client from reaching their goals through; 1) understanding the company’s desired state, 2) providing recommendations from the findings to alleviate manual workarounds through people/process/technology, and 3) collaborating with the client’s functional teams to identify initiatives that will provide immediate and sustained benefits to the firm’s operations.

FinServ conducted in-depth interviews of the client’s Finance and Human Resources staff members and managers. By fully understanding the current state of the firm’s processes and their associated pain points, FinServ was able to provide a list of recommendations regarding the major issues which would vastly increase the firm’s productivity. FinServ identified several projects for focused improvements which we define as projects that yield material business benefits results with a low level of complexity or time.  Some examples of these focused improvements included: 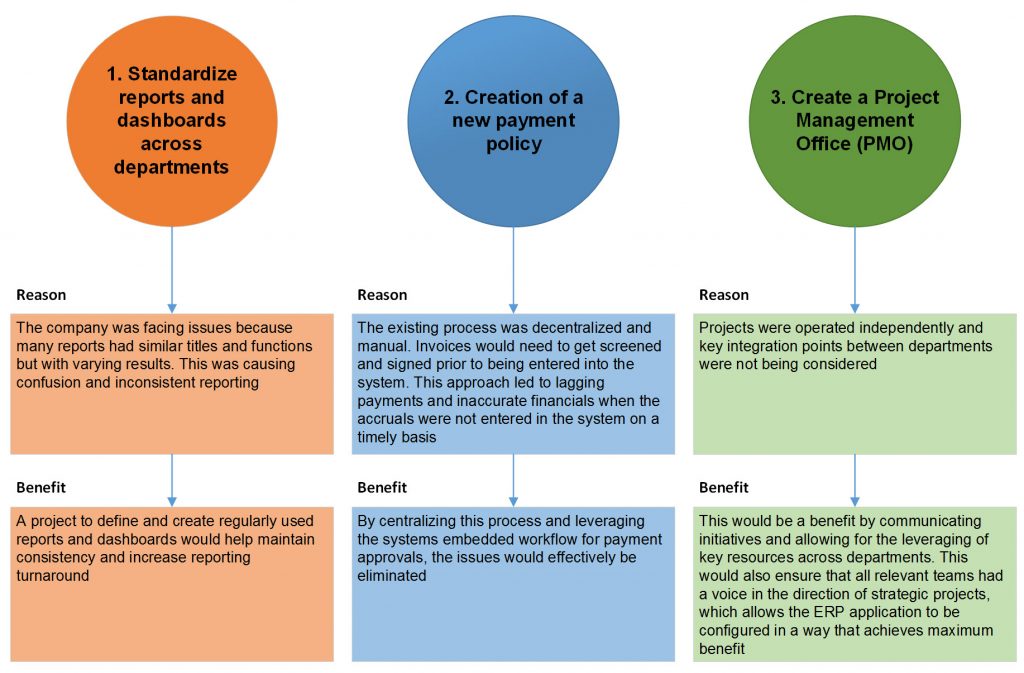 This work produced material efficiencies in the firm’s day to day processes allowing the firm’s operational team to keep up with the growth their business was experiencing.  In addition, the effort provided a long-term roadmap for the firm to follow in order to leverage the ERP system to its fullest capabilities. The firm gained a clear vision of their current and future state processes via a full dissection of their daily operations, making it easier to determine which recommendations would have an immediate impact and those that would help sustain long term growth.

By leveraging FinServ’s Operational Assessment methodology the client was able to finally gain a clear understanding of its daily operations and pain points, and address the key business process and system issues that were hampering its success.  In hindsight, the client realized they had selected the appropriate ERP system however, the initial integration team did not spend enough time to really understand the client’s business and objectives. Therefore, the integration of the new system was not in alignment with many of the issues and goals the client had for the new system.

When you hire FinServ, you will receive a tailored approach to achieve the best return on your technology investment.  FinServ has worked with numerous firms to optimize the use of their people, and the efficiency of their processes while leveraging their technology to take full advantage of its available resources and allow your company to scale and change as the markets require.  FinServ brings deep knowledge of best practices in the industry with the specific software experience to ensure your firm gets the most from your software investments.

Our team can help you determine if you are a good fit for one of these systems and help to estimate the costs and time for your implementation. For more information on how FinServ can help you get on Teams or Office 365, please contact us at info@finservconsulting.com or at (646) 603-3799. Alternatively, please feel free to fill out this form and we will follow-up with your inquiry as quickly as possible.